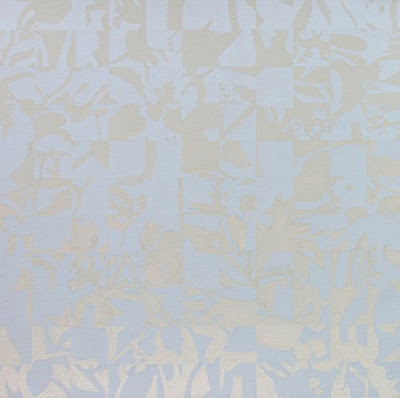 In this piece, a friend asked me, have you ever done a still life in a minimal way. And thinking about it, I had not. So for this piece I chose colors that are very close to each other in hue, value, and intensity.

This morning I was thinking about this journey that we call art. And I was think about how I am in love with either the latest work completed or the piece I am working on. I don't know if others are the same, but that is how it is for me. I am at work in the studio everyday, and I think about it all the time. It is an obsession, a passion. 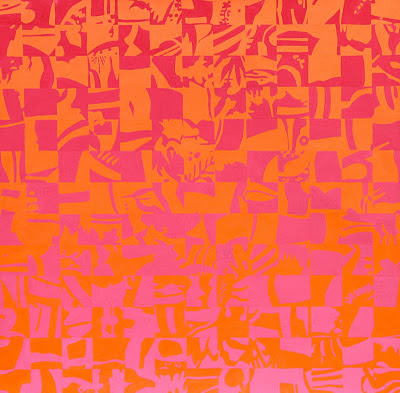 In this series, based on still life, each piece is limited to two colors. Color is thought to bring life to a work of art, as the voice brings life to the written word. In Still Life 16, I have chosen red, the color of blood, the color of life, and the color of fire. The second color is orange. In Newton's Optics (1705), The Latin for orange was aureus. Because each color is an admixture, the colors could never be mixed exactly the same again. The artist could be "close" but not exactly. Each piece is unique in the collection of shapes and colors. Red and orange are analogues colors, close on the color wheel. Red being a primary color, and orange, or red-yellow is a secondary color. The value is mid-tone there really are no darks. It is said a painter should study his work in every degree of light. The period of day between daylight and darkness is called "The painter's hour". At this time of day, reds look darker than by the light of day... sometimes almost black.
at October 30, 2011 1 comment: 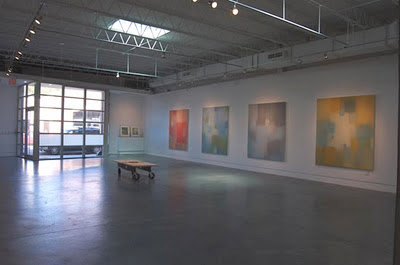 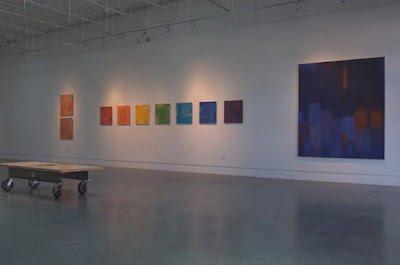 "Much like music, color is a language of mood," states Julian Jackson, whose Aura paintings are presently on view at Page Bond Gallery. It is the textural flatness and the way Jackson diffuses oil paint on wood or canvas so that it obtains a vaporous and vibrating quality, which allows color an opportunity to speak its language. Rothko's colorfield paintings come to mind, though where Rothko's paint is sucked in by the canvas in an emotional recoil, Jackson's surfaces nudge the color forward.

In House from the River (2011) oil paint has been applied in Jackson's signature fashion, to a smoothed wood panel which hovers slightly away from the wall. There is a glimpse of the play of sunlight through wind-shifting trees, reflected sky and window glass, but only because he directed us with the title. Without a narrative focus the painting is another in a series of unfixed explorations of aura, and color, as vibrating energy and light that can be sensed as much as seen.

Aura 3 - Stillness (2011, 82 x 72 in) undermines the intellectual concept of "stillness" to arrive at a more complex understanding that the eye, which is always moving and breathing light cannot fathom stillness at all. Gradations of white and grey allow subtle flashes of blue; blue speaks calmness or tranquility, white of simplicity. But such interpretations only grasp at an emotional ephemera. These paintings change every time you look at them.

Julian Jackson's Aura is on view at Page Bond Gallery through October 29. 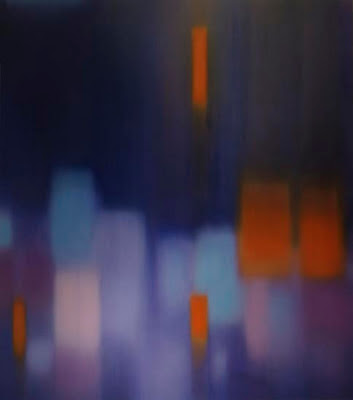 Aura is often defined in near mystical terms as the halo or penumbra of colored light surrounding an individual in a field of radiant energy. The colors of the aura are imagined to correspond to the individuals' personal Chi, or life force. The works in this exhibition are from an ongoing series of paintings and works on paper in which I am exploring phenomena of light, color, and atmosphere in order to map the sense of a day, season, person, or place, as well as to explore the inner architecture of my own sensibility.

On a color wheel the visible spectrum is rendered as 7 key colors; Red, Orange, Yellow, Green, Blue, Indigo, and Violet. Each of these has its' own specific energy, intensity, and web of associations. But we all know that between these cardinal points there lie infinite gradations of hue and shade. In my work I am very interested in these delicacies of nuance. Much like music, color is a language of mood. These works from the Aura Series are like pages from my journal helping me to find form, experiment with subtleties of color, and to further my understanding of the pulse and temperature of passing time. 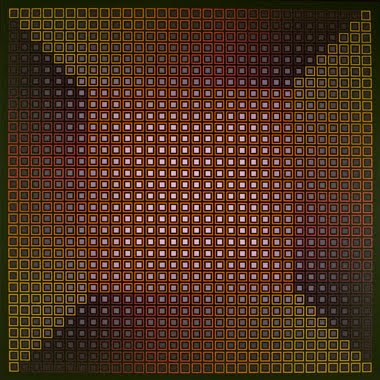 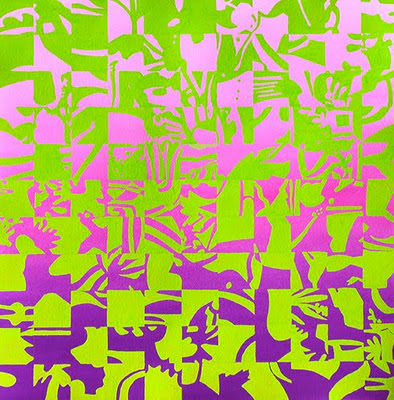 To enter into a still life, is to enter that place of stillness, absent of sound or noise. For the artist, it is to become calm and focused. The still life is about the act of seeing, and in all realism there is abstraction—in abstraction is realism. Though the artist begins with symbols that refer to the material world, what is seen in the final work are shapes rearranged, created with hard edges, and flat color, and careful gradations.
at October 21, 2011 1 comment: 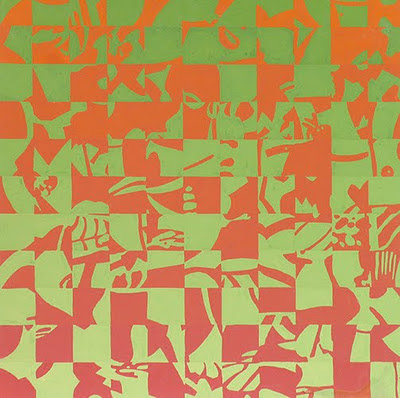 In this series of work I am focusing on the basic elements of shape and color. There are many abstractions in realism, and many shapes of realism in abstraction. The still life offers me many different abstract shapes to put into the grid. There is a slight graduation from top to bottom and from bottom to top. The shapes are hard edge and the color remains flat in each shape. This piece does not tell the viewer what to think, but makes room for the viewer. It creates a space for the viewer to think his own thoughts. Almost invites the viewer to become a partner in the piece.

Still Life
The still life is no longer
What it was originally
I am now free
Think of what I like
True for the viewer, too

My mind wanders
I think of autumn,
The leaves are still green
The apples turn red
All is colorful
The air is brisk
Favorite time of year
at October 10, 2011 7 comments:

Email ThisBlogThis!Share to TwitterShare to FacebookShare to Pinterest
Labels: and still life, colors of autumn, returns to place 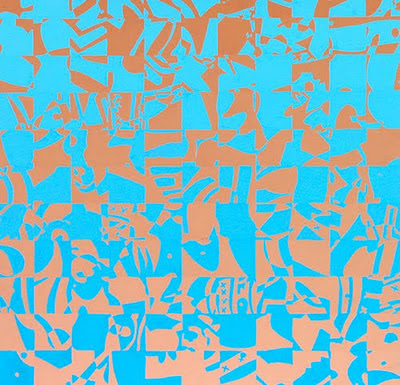 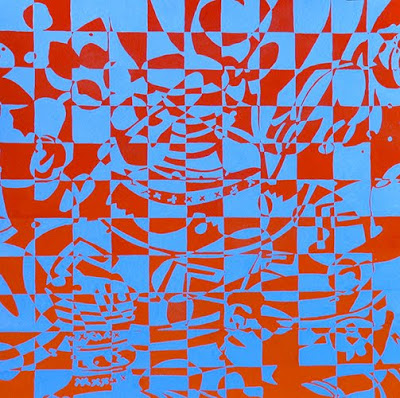 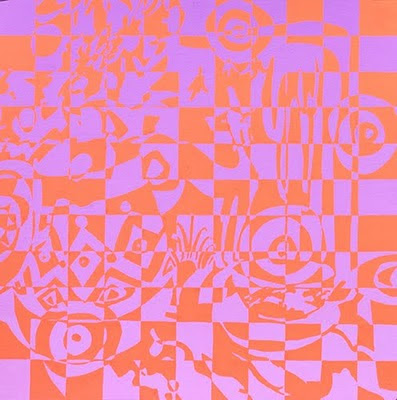 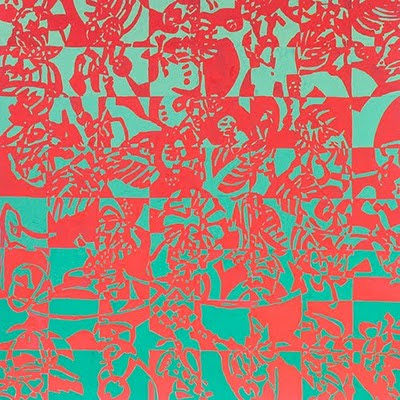 These began with a realistic drawing from the still life.
at October 02, 2011 2 comments: